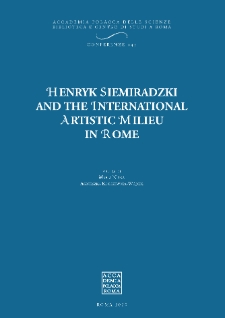 Autor
Maria Nitka (red.) , Agnieszka Kluczewska-Wójcik (red.)
Wydawca
Roma: Accademia Polacca delle Scienze, Biblioteca e Centro di Studi a Roma
Rocznik
2020
ISBN
ISBN 978-83-63305-88-8 Polish Academy of Sciences, ISBN 978-83-956575-5-9 Polish Institute of World Art Studies, ISSN 0239-8605
DOI
10.24425/137284
Seria
Conferenze
Opis
The 24th of October 2018 marked the 175th anniversary of birth of Henryk Siemiradzki, the painter, whose origin, education and artistic and social activity united various areas of today’s Europe: Poland, Belarus, Ukraine, Russia, Germany, Italy and Austria (fig. 1). His painting, representing academism – one of the two main artistic options, is of key importance for the art of the 19th century in Central and Eastern Europe.
(...)
The jubilee year of the 175th anniversary of the artist’s birth in 2018 started in December of the previous year with the exhibition Henryk Siemiradzki and Colony of Russian Artists in Rome. ( Генрих Семи- радский и колония русских художников в Риме), prepared by Pavel Klimov in the State Russian Museum in St. Petersburg, accompanied by an extensive catalogue. The second exhibition Compelled by Beauty. Henryk Siemiradzki and Artists of Late Academism. ( Пленники кра- соты. Генрих Семирадский и художники позднего академизма) opened in September 2018 at the Historical-Artistic Museum in Serpukhov near Moscow. The State Tretyakov Gallery was the co-organizer, and the author of the exhibition and the editor of the catalogue was Tatiana Karpova.
On 12-13 April 2018, in connection with the anniversary, an international conference The Henryk Siemiradzki that we do not know was organized at the National Museum in Krakow, with its title referring to the donation to the museum made by the artist’s family in 1979. In October, in connection with the anniversary, the National Museum in Warsaw organized a series of Meetings with Siemiradzki, presenting mainly researches carried out by this institution.
The international conference Henryk Siemiradzki and the International Artistic Milieu in Rome will close the jubilee year dedicated to the artist. I hope that the research and publication of the catalogue raisoneé will allow us to determine the place of Henryk Siemiradzki’s work in CONFERENZE 145 European painting of the 19th century and will provide an impulse for new and extensive research into the art of that time.
( Introduction)

Leila S. Khasianova
s: 53-62
Pobierz PDF Pobierz RIS Pobierz Bibtex
Henryk Siemiradzki and his private correspondence with Polish painters in St. Petersburg and Munich in The Collection of The National Museum in Krakow

Kamilla Twardowska
s: 63-72
Pobierz PDF Pobierz RIS Pobierz Bibtex
Some ideas about a French Artist of The Time of Louis XV Paints the Portrait of a Marquise by Henryk Siemiradzki