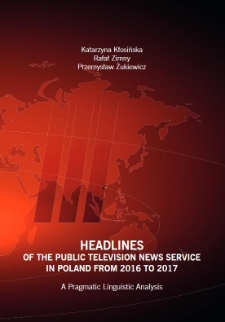 Author
Katarzyna Kłosińska , Rafał Zimny , Przemysław Żukiewicz
Yearbook
2022
ISBN
ISBN (print) 978-83-66847-31-6; ISBN (epub) 978-83-66847-32-3
Language
angielski
Description
This publication, Headlines of the Public Television News Service in Poland from 2016 to 2017 – A Pragmatic Linguistic Analysis, is based on a report which was created at the Council for the Polish Language at the Presidium of the Polish Academy of Sciences and its aim was to indicate how Polish Television ( Telewizja Polska SA) – a station that is publicly financed through mandatory fees paid by citizens – uses language to inform viewers about current political events. It is a linguistic (or more precisely: semantic and pragmatic) analysis and is preceded by a description of the legal situation surrounding the media that conditions the operation of the public television broadcaster. Subject to analysis were the information strips that consist of announcements of report materials in the main broadcast of Wiadomości TVP, the most important news program on public television in Poland. The study, based mainly on the description of linguistic mechanisms (including persuasive and manipulative techniques with semantic basis) that serve to create reality, above all reveals how of elements of the world are valuated using lexical means. The communication practices presented in the course of the analysis were examined in terms of their compliance with the requirements of ethics of the word and the rules governing successful communication, and above all, with the principles of journalistic integrity, which require the creation of unbiased and objective texts. Although the work is not of a political nature, it also shows (in passing, as it were) a vision of Polish political life, filtered through an interpretative filter.
( Foreword)

Publication type
Książka
Resource type
Publikacje zwarte
Rights
© The Authors © Copyright for this edition by Polish Academy of Sciences, 2022. The text of this publication is available under the Creative Commons Attribution 4.0 International license (CC BY 4.0).