Europe on test: the onus of the past 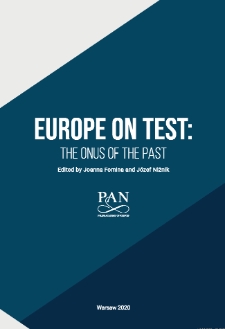 The texts collected in the present volume are based on the contributions to the 2019 ALLEA conference organized in October by the Polish Academy of Sciences in the Institute of Philosophy and Sociology in Warsaw. The location of the conference seems to be the deciding factor that made the authors focus on the Central-Eastern part of the European Union. The countries of this area still experience effects of their imposed dependence on the Soviet Union and many decades of authoritarian rules. These effects are clashing with the memory of the end of unwanted communist experiment, due to successful popular uprising and favorable international situation. As it looks like this quite recent past of former “communist” states affects also their performance in the integrating Europe. We can point out to the problems of national and European identity, the question of solidarity and perception of interests. However, the same issues appeared in the centre of political debates in most of the EU states. Although looking at those issues in different countries we may find completely different historical background there is no doubt that the past is an important factor in all EU member states. Having this in mind we can still ask how to cope with its impact, and what can be done to restore the sense of purpose in Europe’s bold, ongoing endeavour.

(In: Introduction, Józef Niżnik, The Onus of the Past)

Conference materials
Europe on Test: The Onus of the Past and the Necessities of the Future Polish Academy of Sciences, Warsaw, 11 October 2019
Publication type
Materiały konferencyjne
Resource type
Publikacje zwarte